Cancer is characterized by uncontrolled somatic cell growth, often related to genetic mutations in the proteins responsible for preventing tumor cell proliferation or in the regulation of cell growth. Cancer is a well-known age-related disease, with most cancer sufferers being of older age.

How is aging relevant to cancer?

Age is the major risk factor for cancer

Aging is the largest risk factor for cancer, and dwarfs all other environmental risk factors, such as smoking, alcohol, and diet. That is, even when we live an ideal lifestyle that minimizes environmental exposures that influence cancer development, the risk of age-related diseases, including cancer, still grows exponentially.[1]

This is reflected in epidemiology; for example, the median age of cancer diagnosis in the United States is 66.[2]

In epidemiology, the magnitude of a risk factor tends to predict the impact of addressing a particular risk factor for disease.[3] The biology of aging is known to influence cancer susceptibility and development.[4][5] By extrapolation from risk factor magnitude, in addition to empirical evidence from animal research, this suggests that targeting the biological mechanisms of aging may yield larger cancer prevention effects than addressing other cancer risk factors.

Aging is permissive for the development of cancer due to multiple biological mechanisms of aging.[5][6][7] This includes reduced cancer cell surveillance from immune system aging (immunosenescence), systemic low-grade age-related inflammation (inflammaging) that promotes a pro-cancer environment, as well as age-associated accumulation of DNA mutations and genome instability, among various others mechanisms that promote cancer induction and growth.[4][5][6]

Cancer is not adequately explained by mutations 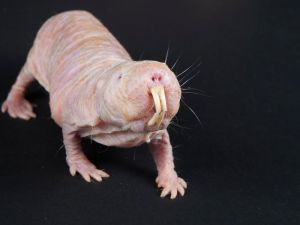 Naked mole-rats are known for their exceptional cancer resistance and longevity.[8]

It is often thought that aging is simply related to cancer in a chronological manner, with longer time allowing for more pro-cancer mutations to accumulate.[9] If cancer was merely an accumulation of mutations, then short-lived animal species would be expected to have minimal cancer mortality. However, this is not the case in reality; short-lived species like mice are prone to cancer, while long-lived naked mole-rats of similar body size are uniquely resistant to cancer development.[9][10]

A large study of over 2000 naked mole-rats (NMRs) found no signs of cancer, based on analyses of deceased NMR tissue.[8][11] More recent research has provided case reports of a few NMRs exhibiting signs of tumors in post-mortem analyses.[12][13] However, the totality of the evidence strongly suggests that cancer is rare in NMRs.[14]

It has been hypothesized that the few cases of cancer observed in worker NMRs may be explained by evolutionary theory. NMRs are a eusocial species, which involve colonies where the majority of the population works to serve a small group of breeders. As the observed cases of tumors occurred in worker NMRs, it is thought that evolutionary pressures that differ between breeders and non-breeders may partly explain this phenomenon.[15]

In animals with larger bodies, the larger number of cells might be expected cancer risk would be greater compared to smaller animals. However, this is not the case across species, with various examples of large animals with low or negligible cancer risk.[16] Peto's paradox arose from the observation that mice live approximately 30 times shorter and have 1000 fewer cells than humans.[16] Instead, it is thought that differences in various anti-cancer mechanisms account for this paradox. 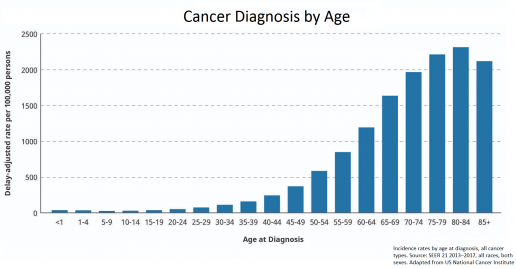 Cancer is regarded as an age-related disease. While many exceptions exist, such as childhood cancers typically associated with monogenic hereditary mutations, most cancers occur in the elderly.[17] The median age of cancer diagnosis in the United States (US) is 66, and is a leading cause of morbidity and death.[2] Case and mortality dynamics of the exponential increase in cancer incidence with age is not unique to the US, being shared across different countries, but is generally a greater cause of death in developed countries.[18] This apparent demographic difference is partly related to longer life expectancies in developed countries, which allows people to live long enough to develop cancer.

This problem of increased cancer mortality in developed countries suggests that if population aging is not slowed (to delay the onset of all age-related diseases, including cancer), increased life expectancy may lead to a greater cancer burden and mortality. This issue is not unique to cancer, and may apply to any age-related disease. The reason such a problem arises is because the incidence of all age-related diseases increases exponentially. Researchers studying the biology of aging believe that this reflects the progressive increase in susceptibility to various diseases with aging. 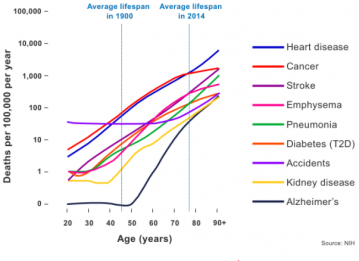 Incidence of all age-related diseases increases exponentially with age

The mortality doubling rate of cancer approximates that of the Gompertz-Makeham law of mortality, which shows that disease mortality doubles every 8 years, reflecting how cancer is an age-related disease.

With an aging populations across the globe, there is an increasing burden of cancer, which has implications for policy, clinical trial strategy, and investment from industry.

A systematic analyses of the Global Burden of Disease Study for cancer show that population aging is a significant contributor to the rise in cancer cases from 1990 to 2017.[19] 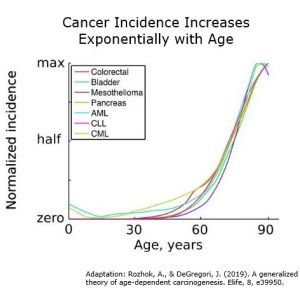 Age as a risk factor for cancer

It is well known that cancer survivors, whether it is children, adults, or the elderly, exhibit accelerated aging.[20] This leads to early onset of age-related diseases, such as dementia, heart disease or frailty.

Childhood cancer survivors are more well-studied than older cancer survivors.[20] One study found that 8% of survivors were frail by the median age 33, while 22% were pre-frail.[21] This is an example of accelerated aging, because these frailty rates are similar to that of older adults.[20][21]

Various biological mechanisms are thought to account for accelerated aging in cancer survivors. These include cellular senescence, mitochondrial dysfunction, and sterile inflammation.[21]

Drugs that target aging can delay the onset of multiple chronic diseases, or even reverse aspects of organ/tissue aging.[1] For a drug to meaningfully slow aging, it must also slow the onset of cancer, in tandem with other age-related diseases. As a result, it has been proposed that drugs like rapamycin or senolytics could be used to not only treat or prevent cancer, but also to reduce the burden of chronic disease and frailty that comes following cancer.[1]

For an overview of rapamycin, see this article.

In a majority of human cancers, there is an increased activity of the mechanistic target of rapamycin (mTOR), which is known to be inhibited by rapamycin.[23] This has led to human clinical trials studying rapamycin's potential in various cancers, as monotherapy or as adjuvant.[23]

In the transgenic HER-2/neu mouse model, mice die prematurely due to susceptibility to cancer.[24] Rapamycin was hypothesized to improve survival in this model due to its ability to slow aging, which would also address an age-related disease like cancer.[24] The drug was shown to extend maximal lifespan, by delaying aging in multiple different organs and also suppressing cancer development.[24]

Other studies suggest that rapamycin can extend lifespan in mouse models where cancer naturally develops, such as in mice prone to cancer due to the Apc tumor suppressor gene mutation, or in mice heterozygous for the Rb1 tumor supressor gene, among others.[25][26][27]

A group of investigators in Germany have argued, based on their experiment in C57BL/6J Rj inbred mice, that rapamycin extends lifespan mainly through delaying cancer incidence, instead of via slowed aging.[28] A further analysis of the paper by Johnson et al. pointed to several important limitations of the study, suggesting that such a conclusion may be premature.[29] Key limitations included the lack of dose-response profiling of rapamycin; studying only the male sex, which is known to respond less to rapamycin likely in part due to sex differences in drug metabolism; lack of reporting on tumor size and incidence, required to determine whether lifespan extension occured only via slowed cancer or from a general effect on aging; and, the cross-sectional nature of the study, which would have reduced sensitivity for detecting age-related organ/tissue changes compared to longitudinal assays.[29][30][31]

Retrieved from ‘https://en.longevitywiki.org/index.php?title=Aging_and_Cancer&oldid=1767’
Category:
This page was last modified on 19 May 2022, at 09:59.
Content is available under Creative Commons Attribution-ShareAlike unless otherwise noted.
Privacy policy
About Longevity Wiki
Disclaimers