Circular RNA (circRNA) is a type of single-stranded RNA covalently closed to form a loop, which occurs by a mechanism known as backsplicing.[1] Due to their circular nature, they have greater stability and are subjected to lesser degradation than linear types of RNA.[2] CircRNAs are mostly produced from protein-coding genes (exons) and multiple circRNAs can arise from a single gene with alternative circularization products, expanding the complexity of post-transcriptional regulation.[3] 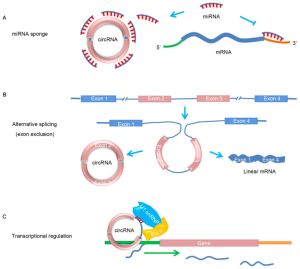 Types of functions for circRNAs in the nucleus which regulate gene expression.[4] CircRNAs can function as (a) miRNA sponges which inhibit their activity, (b) regulators of alternative splicing via exon skipping and (c) directly regulate transcription by stimulating transcription initiation.

CircRNAs were only discovered relatively recently but are rapidly gaining widespread attention due to their important functions in physiology and their relationship to multiple diseases, such as cancer and age-related diseases. However, how the regulation of circRNAs activity occurs remains largely unknown.

CircRNAs regulate multiple aspects of cell biology.[5][6] In the nucleus, they can lead to epigenetic changes such as histone methylation modifications, alternative splicing alterations or direct interactions with RNA polymerase II, affecting transcription of their gene of origin. In the cytoplasm, they can interact with transcription factors and RNA-binding proteins, induce apoptosis or trap proteins and miRNAs.

The role of circRNAs in aging

CircRNAs shows a stronger correlation with aging than any other type of RNA and has been proposed as a new hallmark of aging.[7]

CircRNAs have been shown to accumulate during aging in the brains of fruit flies,[8] mice[9] and rats.[10] Similarly, C. elegans shows an increase of the vast majority of circRNAs during aging.[11] In human peripheral blood, circRNAs are associated with aging phenotypes and cellular senescence.[12]

In flies, long-lived mutants due to reduced insulin signalling (in a FOXO-dependent manner), show a slower increase in circRNAs accumulation during aging, suggesting that circRNAs accumulation is intrinsically coupled to the rate of aging.[13] The same authors report that circRNAs generated by the sulfateless gene (circSfl) control the lifespan of flies. CircSfl is induced specifically in long-lived mutants and overexpression of circSfl alone is sufficient to extend lifespan in fruit flies.[13]

In worms, two of the most abundant circRNAs accumulating during aging arise from different exons of the crh-1 gene,[11] which corresponds to an ortholog of the cAMP Response Element-Binding Protein (CREB) known to have a role in regulating longevity.[14][15] CRISPR-Cas9 deletion of circ-crh-1 (circular RNA for crh-1 gene), but not crh-1, leads to lifespan extension in worms.[16] This seems to occur mostly in a neuronal tissue-specific manner, as restoration of circ-crh-1 in neurons only leads to a lifespan similar to wild-type. However, it should be noted that the lifespan effects of the removal of circ-crh-1 are rather modest (12%). Nonetheless, selective removal of circRNAs by CRISPR-Cas9, if efficient, provides a powerful tool to study the effect of circRNAs in aging.

For now, it remains unclear whether the age-associated accumulation of circRNAs is detrimental or whether it offers a protective role during aging.

Retrieved from ‘https://en.longevitywiki.org/index.php?title=Circular_RNAs_(CircRNAs)&oldid=2343’
Categories:
This page was last modified on 27 December 2022, at 12:48.
Content is available under Creative Commons Attribution-ShareAlike unless otherwise noted.
Privacy policy
About Longevity Wiki
Disclaimers