The chemical structure of trans-resveratrol.

Resveratrol (trans‐3,5,4′‐trihydroxystilbene) is a compound produced naturally by various plants in response to injury or microbial infection. Its main dietary sources include grapes, blueberry, cranberry, peanuts, and legumes.[1] Resveratrol has gained widespread attention, in part due to reports of its lifespan extension properties in a range of model organisms.[2] However, there has also been significant controversy and criticism.[3] Resveratrol is currently considered a dietary supplement and is not an approved medicine.

As of today, resveratrol is known to have widespread effects in physiology but is not considered to be a lifespan extending agent.[4] Additionally, despite years of widespread misinformation resveratrol has been debunked as a specific in vivo activator of the sirtuin protein SIR2.[5][6]

Resveratrol has been shown to extend healthy lifespan in yeast, worms, fruit flies, bees, and fish by 10-70%. [7][8][9][10][11] In mice on a high-calorie diet, resveratrol reduced the risk of death from the diet by 31%.[12] However, most of these studies come from David Sinclair's lab at Harvard University. Sinclair has conflicting monetary interests given he was the founder of the company Sirtris Pharmaceuticals, a biotechnology company focused on using resveratrol and other potential sirtuin activators to extend human lifespan.[13]

Independent laboratories demonstrated there is no lifespan extension in healthy mice and rats.[14][15][16][17] Resveratrol has been shown to delay aspects of vascular aging in rodents, improving aging-impaired cognitive function.[17][18] However given the lack of evidence of resveratrol to extend lifespan in rodent models, it does not appear likely to produce meaningful benefit for human aging.

Currently, it is unclear whether resveratrol will exert meaningful biological effects in humans.[3] This is an ongoing area of research, but evidence for human lifespan extension will need to be shown in large, randomized controlled trials.

The ¨Invecchiare in Chianti (InCHIANTI) Study¨ (literally meaning “Aging in the Chianti Region”), conducted a prospective cohort study of 783 people over the age of 65 in the Chianti region of Italy, and demonstrated that urinary concentration of resveratrol metabolite was not associated to age-related diseases nor was predictive of all-cause mortality.[25] Therefore, they concluded that resveratrol had no significant influence on healthspan nor lifespan of the individuals in the study.

It has been shown that resveratrol is generally safe in humans.[19][20] Mild adverse effects such as nausea, diarrhea, and abdominal pain have been reported with doses of 1 g per day and higher.[26][27]

Resveratrol is quickly metabolized and is poorly absorbed in the human body, which limits its potential for clinical use in humans.[19] 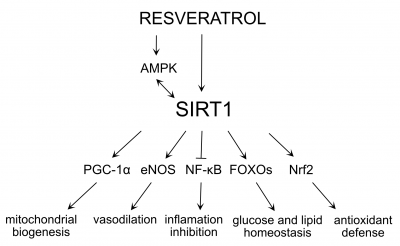 Resveratrol had been proposed to act via sirtuins to multiple downstream cellular targets involved in regulating aging. Silent Information Regulator 1 (SIRT1) protein was initially suggested as its main target in mammals,[19] whilst SIR2 was proposed to be the main resveratrol target in yeast.[30]

Resveratrol was hypothesised to induce SIRT1 either directly or through phosphorylation of AMP-activated protein kinase (AMPK). Upon induction, SIRT1 has been shown to modulate activity of molecules taking part in stimulating mitochondrial biogenesis, vasodilation, antioxidant defence, glucose and lipid homeostasis, as well as those inhibiting inflammation.[28][29] Alternative modes of action for resveratrol have been suggested, such as introduction of replicative stress in the cell.[31]

Whether resveratrol directly activates SIRT1 is controversial, with a number of studies failing to observe activation or interaction between the two molecules. [5][6] It is now generally considered that resveratrol does not activate sirtuins in vivo. Studies in vitro had apparently used a modified peptide on resveratrol which changed its conformation and allowed it to bind SIR2 and SIRT1.[5]

This story is somewhat reminiscent of experiments in which sirtuins had been reported to extend lifespan in C. elegans by 50%.[32] When independent scientists failed to recapitulate such findings, it came to light that the original experiments had been performed in an animal with a sensory neuronal background mutation previously linked to longevity, whilst it had no sifnificant effect in wild-type strains.[33] Therefore sirtuins have similarly been debunked as longevity genes.

In 2004 a company called Sirtris Pharmaceuticals, Inc. was conceived to study potential of resveratrol as a drug for type 2 diabetes, cancer, and other diseases. The company's initial product was called SRT501, and was a formulation of reservatrol. In 2008 Sirtris was purchased by the pharma giant GlaxoSmithKline (GSK).[34] Further development of SRT501 were terminated in 2010, in part due to its side effects and lack of specificity to SIRT1, followed by shutdown of Sirtis in 2013. [35]

Retrieved from ‘https://en.longevitywiki.org/index.php?title=Resveratrol&oldid=2358’
Categories:
This page was last modified on 27 December 2022, at 16:39.
Content is available under Creative Commons Attribution-ShareAlike unless otherwise noted.
Privacy policy
About Longevity Wiki
Disclaimers