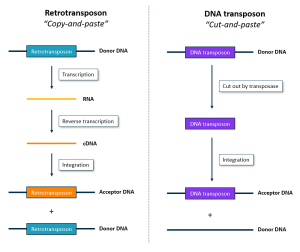 Transposons were first discovered in corn (maize) by Barbara McClintock during the decades of 1940-50s, for which she won the Nobel Prize of Physiology or Medicine in 1983.[1][2][3]

Transposons, also called "jumping genes", are genes not fixed in location and are capable of changing position within the genome. Transposase enzymes bind to the end of transposon elements and catalyze their movement to other parts of the genome. Transposons have no known direct functions, but they can sometimes result in de novo mutations or changes in genome size. This can result in dangerous modifications to the genome, as they might lead to inactivation of important sequences, aberrant control of genes or tumourogenesis.

There are several types of transposons:

This type of transposons, and unlike retrotransposons, are able to translocate from one chromosome to another. They code themselves for transposase enzymes, which facilitates the transferring process. DNA-only transposons do not transfer very frequently and it is unknown what process is responsible for their action.

These are the most common class of transposons in humans. They are sections of DNA inserted into the chromosome, but never jump out of it to other chromosomes. Retrotansposons transcribe their sequence of DNA into RNA copies and require the enzyme reverse transcriptase to then be converted into double-stranded DNA, which will then insert themselves elsewhere in the genome. They are named after retroviruses such as HIV, which also require reverse transcriptase to be inserted into the host chromosomes and replicate. Retrotransposons have had an important role in evolution by generating a large amount of the repetitive DNA sequences, and much of the non-coding "junk" DNA consists of this type of transposons.

Transposons as a cause of aging

Transposons are hypothesized to be a cause of aging due to some of their properties.[4] This hypothesis is based on the observation that duplication of genes during transposition, the process in which a transposon element moves to another location in the genome, might lead to inactivation of essential genes or to cause aberrant function. Thus dysfunctional processes during aging have been proposed to arise as a consequence of the large amount of transposon elements present in "junk" DNA regions, and might potentially explain the properties of senescent cells.[4]

Laminopathies are a type of rare genetic disorders that arise from mutations in nuclear lamina genes, which are important to maintain fibrillar networks in the nucleus and to regulate events in chromatin organisation. A reduction in the expression of some lamin genes is also associated with aging and to a deregulation of transposable elements.[5] (*to expand)

Retrieved from ‘https://en.longevitywiki.org/index.php?title=Transposons_in_aging&oldid=2164’
Category:
This page was last modified on 12 November 2022, at 15:08.
Content is available under Creative Commons Attribution-ShareAlike unless otherwise noted.
Privacy policy
About Longevity Wiki
Disclaimers