Fisetin is a potent, plant-based polyphenol compound that has been found to reduce senescence markers (signs of cellular aging) in human and animal tissues.[1] It can be extracted from most vegetables and fruits, such as strawberries (160 μg/g), apples (26.9 μg/g), persimmons (10.6 μg/g), lotus roots (5.8 μg/g), onions (4.8 μg/g), grapes (3.9 μg/g), kiwi (2.0 μg/g), peaches (0.6 μg/g), and cucumbers (0.1 μg/g).[2][3] Fisetin has many therapeutic benefits, including anti-inflammatory, cardioprotective, and neuroprotective properties. It is also an antiangiogenic, meaning it can reduce the growth of unwanted blood vessels.[4]

It is important to note that the consequences of eliminating senescent cells in vivo remains unknown, with some studies suggesting that it might be detrimental.[5]

The primary advantage of fisetin treatment is that it targets senescent cells (SCs).

SCs are cells that have accumulated DNA damage or other stressors, which leads to changes in two types of cellular proteins: chromatin, the protein that chromosomes, including RNA and DNA, are made of; and secretome, a general name for the expression profile of proteins secreted by human cells. These changes lead to apoptosis (programmed cell death) which prevents the cell from replicating.[1] This mechanism is designed to prevent the cell from becoming a cancer cell.

However, SCs can instead develop a senescence-associated secretory phenotype (SASPs) to induce inflammatory immune responses via cytokines, chemokines, and extracellular degrading proteins. Even at low levels, SASPs have been shown to contribute to tissue dysfunction.[1]

SCs are closely linked to age since they usually increase with age in several tissues, including adipose (fat) tissue, skeletal muscle, kidney tissue, and skin.[6]

Fisetin appears to be a well-suited treatment to destroy senescent cells and this has thus been investigated in mice and in humans. 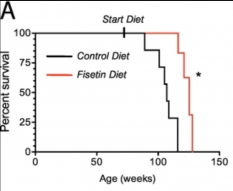 Yousefzadeh et al. (2018) found that fisetin was the most effective senolytic out of 10 different flavonoids (a class of plant-based polyphenol compound).[1] In vitro, the defective DNA repair gene Ercc1−/− in the embryonic stem cell line was targeted to induce senescence. The mutant Ercc1−/− mice cells had the greatest improvement when treated with fisetin.

In vitro, they used Ercc1−/∆ mice and inserted the p16Ink4a-luciferase transgene (bioluminescent foreign gene) to accelerate accumulation of senscent cells. The mice were then fed a diet from 6-8 to 10-12 weeks of age that included fisetin supplements administered every 500 mg/kg.

They found that luciferase Ercc1−/∆;p16Ink4a signal was significantly suppressed following the diet. They also found that, in the following weeks, the fisetin-treated mice had lower p16Ink4a expression levels when they did not receive more fisetin.

Yousefzadeh et al. (2018) argue that this result demonstrates both that fisetin can destroy senescent cells and that fisetin does not have to be continuously present to successfully suppress senescence.[1]

Preliminary studies in human adipose explant tissues, suggested that fisetin can be an effective supplement to clear senescent cells.[1]

Animal studies have shown that it can improve the status of lung fibroblast tissues, known as IMR90 cells.[1] Fibroblast cells normally help with lung architecture, specifically cell scaffolding and injury response. However, when they change in number and phenotype, they can also play a key role in the development of chronic lung conditions like asthma, chronic obstructive pulmonary disease (COPD), and idiopathic pulmonary fibrosis (IPF). Two days following a fisetin treatment, scientists found that an enzyme only found in senescent cells, SA-β-gal, had decreased by 70 percent. 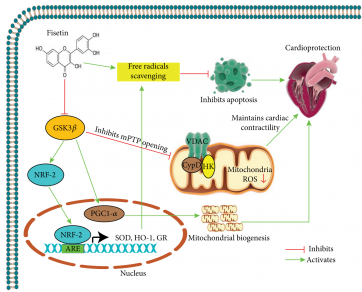 Similar to rapamycin, fisetin is believed to inhibit the effects of the glycogen synthase kinase 3β (GSK3β) enzyme by suppressing the signaling pathway and reversing mitochondrial dysfunction.[9]

The GSK3β enzyme plays a key role in ischemia reperfusion injury (IRI). IRI describes tissue damage that occurs when blood flow returns to myocardial (heart) tissue after a period of ischemia (lack of oxygen). During an IRI, the mitochondria of the tissue cells are especially susceptible to damage: GSK3β converges in the mitochondria and affects mitochondrial functions, including the determination of cell outcomes.

By inhibiting GSK3β, fisetin regulates the mitochondrial ATP-sensitive K+ channels and protects the cell. Specifically, fisetin has been found to reduce oxidative stress markers in other cell structures, lysosomes and microsomes.[9] Plus, decreasing mitochondrial swelling and less damage from IRI on the K+ channels when fisetin was used.

Fisetin can help inhibit the growth of and expedite the death of cancerous colon cells. It does this in two ways:

Fisetin has also been found to be an effective inhibitor of matrix metalloproteinase (MMP)-1 activity. MMP-1 aids in extracellular matrix (ECM) remodelling and degradation which can occur during neoplastic transformation like uncontrolled cell growth or failed apoptosis. More broadly, this can manifest as tumor growth and metastasis of cancerous cells.[3] Since MMP-1 promotes ECM remodelling and fisetin inhibits MMP-1 activity, fisetin thus helps to slow the progression of cancer.

ECM remodelling describes the changes that occur in cells when they undergo neoplastic transformation, i.e. when they grow more rapidly than they should, or do not die when they should. More broadly, this can manifest as tumor growth and metastasis of cancerous cells.[3]

Retrieved from ‘https://en.longevitywiki.org/index.php?title=Fisetin&oldid=2473’
Categories:
This page was last modified on 1 February 2023, at 17:23.
Content is available under Creative Commons Attribution-ShareAlike unless otherwise noted.
Privacy policy
About Longevity Wiki
Disclaimers