Mitochondria are responsible for creating adenosine triphosphate (ATP), a chemical which provides the energy for many processes within a cell.[2] This process also creates byproducts, such as reactive oxygen species (ROS).[1] Over time, the accumulation of ROS damages cells and mitochondria, contributing to the decline in health associated with old age, according to the free radical theory of aging.[1][2]

Mitochondrial dysfunction is considered one of the hallmarks of aging due to multiple lines of evidence linking it to aging and its associated diseases, such as osteoporosis and Parkinson's disease.[3][4][5] It should be noted that the free radical theory of aging is not supported by more recent research. Some evidence in multiple animal models suggests that mild mitochondrial dysfunction actually lengthens lifespan, with resultant damage from ROS leading to increased long-term stress resistance.[6]

Mitochondria are structures found in almost all eukaryotic cells (cells with clearly defined nuclei).[7] Scientists believe that they began as independent organisms which were engulfed by host cells with which they formed a symbiotic relationship, eventually becoming part of the host cells.[8] They possess their own DNA, separate from that of the organisms they inhabit, called mitochondrial DNA (mtDNA).[9][2][8] A mitochondrion (the singular of mitochondria) possesses two membranes; one enveloping the other.[10] Within the matrix (the region within the inner membrane), a series of reactions known as the Krebs cycle produces a chemical called NADH.[8] A structure called complex 1, on the inner membrane, then uses the NADH in a process which pumps protons from the region within the inner membrane to the area between the membranes. Structures known as complex 3 and complex 4 (the latter of which requires oxygen to fill its role) are necessary components, also located on the inner membrane.[10] The result is the formation of a membrane potential used by another structure, complex 5, to generate ATP, which provides energy for cells.[10][7] This process by which mitochondria create ATP is known as oxidative phosphorylation.[8]

Reactive oxygen species, also known as free radicals, are unstable molecules containing oxygen, which easily react with other molecules in a cell.[11] The process of respiration via oxidative phosphorylation produces ROS as a byproduct. The mitochondrial free radical theory of aging proposes that over time, increasing ROS production triggers mitochondrial dysfunction, which causes further increases in ROS production and cellular deterioration.[1][12] Specifically, free radicals trigger mitochondrial dysfunction by damaging the DNA of the mitochondria by causing its atoms to lose electrons, although some studies suggest that this damage is done indirectly.[12][2] This does not usually harm the cell, as quality-control mechanisms destroy the damaged mitochondria, but those mechanisms become less effective as people age.[2] Over time, this damage to the mitochondria leaves cells less efficient at producing energy. In addition to harming the mitochondria, ROS contribute to the health declines of old age by causing muscle weakness, bone frailty, immune suppression, and even cancer, among other conditions.[2]

The free radical theory of aging is no longer widely accepted among biogerontology researchers for various reasons. Importantly, preclinical and clinical research has shown that reducing ROS with antioxidants not only fails to increase healthy lifespan, but may also cause harm. For example, the Beta-Carotene and Retinol Efficacy Trial investigated two supplements in thousands of older adults previously exposed to asbestos, finding increased lung cancer in smokers relative to placebo.[13] Beta carotene was an antioxidant, and retinol is also known as vitamin A. The study not only found lack of benefit for multiple endpoints, including risk of cancer, heart disease, and mortality, but also found increased risk of death in the treatment group.[13]

Additionally, there is evidence that mild mitochondrial dysfunction may increase lifespan. Relatively low level damage from ROS has been shown to increase long-term stress resistance.[6] This has been linked to hormesis, a well-known process in biology where low levels of stress can lead to compensatory responses that result in benefit.[6]

Mitohormesis is a response of mitochondria to stressors or toxins which so thoroughly repairs their damage that the cell is healthier after the damage than before.[1][12][14] It is a form of hormesis, which is described above.[15] In fact, such damage may trigger a mitochondrial defensive response not only in the tissues containing the defective mitochondria, but also distant tissues. Evidence exists which shows that mitohormesis may be able to extend lifespan in mammals, but there is no consensus on this view.[5] For mitohormesis to occur, mitochondria must communicate with the cell's nucleus.[14] They appear to use ROS, among other things, as signals for this communication.[12][14] This productive role for ROS may explain why increased ROS sometimes appears to slow aging, rather than aggravate it. Some scientists have suggested that a certain amount of ROS is beneficial, but any greater amounts are harmful.[12]

Mitochondrial dysfunction contributes to a number of aging-related ailments.

Alzheimer’s disease (AD) occurs almost exclusively in older adults, resulting in deterioration of cognition and memory due to progressive and selective loss of neurons in the forebrain and other brain areas.[17][9] Historically, there have been two mainstream hypotheses within the research community on its cause. The first is that it results primarily from the accumulation of amyloid-beta proteins in the brain; the second is the accumulation of neurofibrillary tangles called tau.[18]

Parkinson’s disease (PD) is a movement disorder resulting from degenerative loss of certain brain cells involved with the chemical dopamine, in the brain region called the substantia nigra.[4][16] Its main symptoms are: tremor in the hands, arms, legs, trunk, and/or head; stiffness of the limbs and trunk; slow movement; and impaired balance and coordination. Other symptoms may include depression and other emotional changes; difficulty walking, swallowing, chewing, or speaking; urinary problems and constipation; skin problems; and sleep disruption. Symptoms usually begin gradually and get worse over time, and PD is by far most common in the elderly.[17] Evidence suggests that PD is at least partly caused by mitochondrial dysfunction, though it is not conclusive.[20] Scientists speculate that mitochondrial dysfunction harms ATP production and a process called "calcium buffering" (another function of mitochondria), as well as exacerbating oxidative stress (an imbalance between oxidants and antioxidants).[21][22] These processes are theorized to cause PD by killing brain cells in the substantia nigra. Recent evidence also suggests that certain processes controlling the distribution and structure of mitochondria are linked with PD.[21] 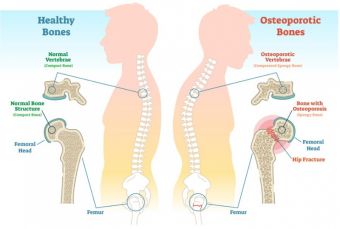 Osteoporosis is a bone disease that develops following bone mass and mineral density decrease, or when the quality or structure of bone changes. This can reduce its strength, which can increase the risk of breaking. The risk of osteoporosis dramatically increases with increasing age.[23]

Some evidence suggests that mitochondrial dysfunction in osteoblasts (cells which produce bone) and osteoclasts (cells which break down bone) contributes to osteoporosis, by mutating the body's mtDNA.[3][24] One study found that mice experiencing an accelerated accumulation of mtDNA mutations lost bone at a faster rate than normal mice. The investigators also showed a reduced bone formation rate, reduced osteoblast population densities, and increased osteoclast population densities, among other differences. Researchers involved in the study argued that similar processes could contribute to human osteoporosis.[24]

COVID-19 is an infectious disease caused by a virus known as SARS-CoV-2. COVID-19 disproportionately affects the elderly, resulting in severe symptoms and substantially increased mortality risk. Yet, youth infected with SARS-CoV-2 tend to have mild symptoms or are asymptomatic. Mitochondrial dysfunction is associated with some risk factors for COVID-19, and there is some evidence that it contributes to COVID-19 severity.[25][26][27]

Some researchers have suggested that the downstream effects of mitochondrial dysfunction is partly responsible for the severe pneumonia, multi-organ failure, and death which accompanies COVID-19.[26] However, as SARS-CoV-2 was discovered relatively recently, there is generally a lack of direct evidence linking mitochondrial dysfunction to COVID-19.

In patients suffering from COVID-19 induced pneumonia, it has been shown that mitochondrial function is dysregulated in monocytes.[27] Monocytes are cells that are part of the innate immune system, and may contribute to an exaggerated immune response that drives poor outcomes following infection.[27]

Retrieved from ‘https://en.longevitywiki.org/index.php?title=Mitochondrial_Dysfunction&oldid=1680’
Category:
This page was last modified on 23 December 2021, at 21:27.
Content is available under Creative Commons Attribution-ShareAlike unless otherwise noted.
Privacy policy
About Longevity Wiki
Disclaimers