Killifish as an aging animal model

The African turquoise killifish (Nothobranchius furzeri) is the shortest lived vertebrate known to date, with a median lifespan of only 4 to 8 months. This short lifespan is closer to that of unicellular and invertebrate research organisms (such as the fruit fly) than to vertebrate research organisms such as mice or zebrafish.[2] This places the Turquoise Killifish in the unique position of allowing high repeatability and feasibility for experiments, whilst better recapitulating human aging traits.

Habitat and life cycle of the turquoise killifish 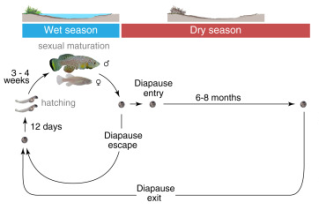 The life cycle of killifish consists of two main stages: natural lifespan and diapause state. During the rainy season, the killifishes hatch and rapidly develop to reach sexual maturity. Subsequently, the killifish mate and constantly produce eggs. The eggs remain in a diapause state to survive the following dry phase, where the whole pond is desiccated, and all killifish die. [3]

The turquoise killifish's natural habitat is in freshwater ponds throughout central and eastern Africa, specifically the regions of Zimbabwe and Mozambique.[4]

Due to alternating dry and rainy seasons, these regions have pronounced seasonal differences in water availability, causing the turquoise killifish to inhabit reservoirs of water that fill up during short rainy seasons and dry out entirely during the longer dry seasons.

To survive as a species, the turquoise killifish has developed a unique annual life cycle in which it can persist periods of drought through an extended period of embryonic stasis called diapause.[5] With the onset of the wet season, the turquoise killifish then switches to a mode of explosive growth and sexual maturation, resulting in females laying up to 120 eggs per day.[6]

The process from hatching to sexually mature fish takes no more than 14 days, making it the fastest known rate of sexual maturation for vertebrates.[7] Subsequently, the fertilized eggs enter the diapause state to endure the following dry season, and the circle starts again. As a result of this annual life cycle, the turquoise killifish has a short adult lifespan of four to eight months and displays aging-related transformations like lose of body colour and specific patterning (see section Aging features).

While other standard model organisms such as mice and zebrafish have an average life expectancy of over 2.5 years in captivity, turquoise killifish live only four to eight months on average.[8] Thereby, the lifespan of turquoise killifish is strongly strain-dependent. The original laboratory strain GRZ has the shortest lifespan of 11 to 18 weeks [3][9][10], while longer-lived strains like MZM0403 have a lifespan of 30 weeks[10]. Besides the strain, the lifespan also depends on diet, feeding frequency, and housing conditions.[9]

Although no sex-dependent difference in life expectancy is found in captivity[3][10][11], significant differences in sex ratios are observed in the wild[12]. During the rainy season, the proportion of the male population decreases, so that after three months at least two thirds of the population are female.[13]

Dietary restriction can increase maximum lifespan of both the short-lived GRZ laboratory strain and the longer-lived wild-derived strain MZM-04/10P.[14] However, in the wild strain MZM-04/10P, lifespan extension is associated with increased baseline mortality.[14] In addition to dietary restriction, lowering the water temperature can also increase median lifespan significantly.[15] This demonstrates that lifespan is malleable in killifish when subjecting them to specific interventions, as similarly observed in other animal models.

With age, the fish lose their body color, the fin structure deteriorates, and the spine becomes curved. [16]

Killifishes show substantial strain-dependent variation in the duration of this decrepit state. Fish from wild strains can remain in this state for several weeks before they finally die, while fish of the short-lived GRZ strain usually die before developing a macroscopic phenotype.[17]

Besides an overall decrepit appearance, killifishes also show an impaired ability to regenerate the caudal fins with age, whereas young fish can regenerate them almost completely.[19]

Neurodegeneration in Stratum Griseum Superficiale of the Optic Tectum of Killifish and the effect of resveratrol detected by Fluoro-Jade B staining.[11]

To evaluate cognitive decline in aged killifish the active avoidance test is used. In this test, fish make an association between a red light and punishment. Both young and old fish succeed in learning the task, but young fish show significantly higher success rates than old fish.[11][17][15]

Telomeres are protective caps at the ends of chromosomes that become shorter with age in various organisms. The telomere length of the short-lived killifish strain GRZ does not shorten with age, suggesting that the shorter lifespan of the strain is not a result of short telomeres.[21] On the other hand, the telomeres of the longer-lived strain MZM0403 show significant telomere shortening within 16 weeks of life.[21] Surprisingly, no upregulation of the telomere-preserving enzyme telomerase can be observed in old individuals of the short-lived strain GRZ, but upregulation can be observed in the longer-lived strain MZM0403.[21]

Lipofuscin, or age pigment, is an autofluorescent pigment that accumulates progressively with age within the cells of many species.[22] In old killifish, elevated lipofuscin levels are detected in various cell types such as heart and liver cells.[17][18][23] Thereby, lipofuscin accumulation is faster in the short-lived strain GRZ than in the longer-lived strain MZM0403, suggesting that the short lifespan of the GRZ strain is associated with faster histological aging.[17]

Lowering water temperature (for instance from 25°C to 22°C) as well as dietary restriction can reduce age-related lipofuscin accumulation in old killifish.[15][14]

Mitochondria are the primary energy providers of most eukaryotic cells, and unlike other organelles, they are unique in that they contain their own DNA (mtDNA). Although large-scale, age-dependent mtDNA deletions are not observed in old killifish (unlike in mammals), the DNA copy number in old killifish decreases with age.[24] Overall, old killifish show lower expression of mitochindria-associated proteins such as Pgc-1a, Tfam, and mtSsbp, and old muscle tissue has decreased levels of respiratory chain complexes.[24] This indicates that oxidative phosphorylation (the process of energy production in mitochondria) might be impaired in old killifish (see also Mitochondrial dysfunction).[24]

After a certain number of replications, cells enter a state of growth arrest and altered function called replicative senescence. Replicative senescence is considered a hallmark of aging, and senescent cells can be detected by markers such as the appearance of senescence-associated β-galactosidase (β-GAL).[25] Old killifish show increased β-GAL activity,[18][23] which is attenuated with lifespan-extending interventions like lowering water temperature.[15] 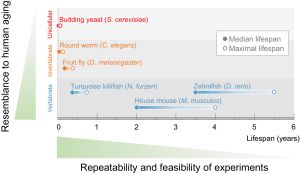 Dr Dario Valenzano, trained at Brunet lab in Stanford and currently at the Leibniz Institute on Aging, is especially known for his contribution in characterising the turquoise killifish. He is considered to have established this species as a novel research model and as an aging animal model.

One of the main advantages of using killifish as an aging animal model is its close resemblance to human aging, usually seen in much longer lived animal models such as mice and zebrafish, and its short lifespan of 4 to 8 months, which allows for greater experimental scalability.[26]

The turquoise killifish has been recently established as a model for age-related eye disease.[27] Considering vision decline as a conserved aging hallmark, the aging-associated decline of the killifish visual system has been proposed as a useful in vivo model to study brain aging and rejuvenation.[27]

The group led by Anne Brunet in Stanford University has developed a genotype-to-phenotype platform using de-novo-assembled genome and CRISPR/Cas9 technology, which allows for high-throughput and high efficiency knock-out and knock-in studies in killifish.[28]

A key tool for generating transgenic species in fish is the transposase system. Transposon elements (TE) are genes capable of changing position within the genome, which can sometimes result in de novo mutations or changes in genome size.[29] Transposase enzymes bind to the end of TE and catalyze their movement to other parts of the genome. In killifish, the Tol2 transposase system has been adapted from other model animals by Valenzano to integrate genes of interest into the host's genome in a stable and efficient manner.[30]

Additional progress has been made in developing other genetic tools for killifish. [31][32] Due to the fast life cycle of killifish, new stable transgenic lines can be generated as rapidly as in 2 to 3 months.[28]

Whilst killifish can be a great alternative compared to more conventional animal models, they also suppose some limitations:

Retrieved from ‘https://en.longevitywiki.org/index.php?title=Killifish_as_an_aging_animal_model&oldid=2340’
Categories:
This page was last modified on 27 December 2022, at 12:37.
Content is available under Creative Commons Attribution-ShareAlike unless otherwise noted.
Privacy policy
About Longevity Wiki
Disclaimers