Lipofuscin is a yellow-brown autofluorescent pigment also known as "aging pigment" for its ability of age-related progressive accumulation as a robust senescent marker in long-lived non-dividing cells of different tissues and organs of humans and animals.[1][2][3] It is a chemically and morphologically polymorphous waste material that accumulate primarily in the lysosome that cause dysregulation and reduction of its autophagic capacity, ROS (reactive oxygen species) generation, elevation of the lysosomal pH, leading to lysosome leakage.[4] Lipofuscin consists of a non-degradable intralysosomal substance, which forms mainly due to iron-catalyzed oxidation/polymerization of misfolded proteins (~30–70%) and lipid (~20–50%) residues together with metals such as iron, copper, zinc, manganese, and calcium, in a concentration up to 2%.[5][6][7][8][9]

Accumulation of lipofuscin or "aging pigment" as a usual aging event, should be distinguished from accumulation of ceroid - autofluorescent storage material associated with disease and usually produced under various pathological conditions unrelated to aging.[10] Ceroid, has been suggested to jeopardize cell performance and viability by inducing membrane fragility, mitochondrial dysfunction, DNA damage, and oxidative stress-induced apoptosis.[11]

Since lipofuscin, in the process of aging, accumulates in a nearly linear way in the postmitotic senescencent cells (cardiomyocytes, retinal epithelial pigment cells, hepatocytes, neurons and keratinocytes),[12] it can be used as a detectable "marker" to estimate aging. This approach is particularly widely used to determine the age of crabs and other crustaceans either by labor histological fluorescent-microscopy examinations[13] or simply by extractable lipofuscin solvent fluorescence measurements.[14]

Detection of lipofuscin content can be used as a biomarker of old lysosome accumulation, either by its typical autofluorescence properties and fluorescence-based methods, or by selective staining with Sudan black B, which stained lipofuscin granules, allowing for detection in cells, tissues and body fluids.[15][16][17][18]

Because lipofuscin is a covalently cross-linked aggregate, it cannot be removed from the cytosol by the ubiquitin-proteasome system.[19][20] Furthermore, lipofuscin could belong to advanced glycation end product (AGE) deposits.[21] Lipofuscin is not an inert "slag". Lipofuscin granules accumulation can lead to pathology and accelerate the aging process.[22] The rate of lipofuscin formation has been shown to be negatively correlated with the life expectancy of postmitotic cells, ie, the higher the rate, the shorter the lifespan of the cell due to decrease of cellular adaptability.[23] Naturally, therefore that progressive deposition of lipofuscin promotes the development of age-related pathologies, including macular degeneration, heart failure, and neuro-degenerative diseases.

One of the diseases associated with the accumulation of lipofuscin is dry age-related macular degeneration (dry AMD) – disease often diagnosed in people over 70 years of age and a leading cause of rapid vision loss. Dry AMD is a slow-progressing disease in which yellow drusen containing lipofuscin are deposited between the retinal pigment epithelial (RPE) cell layer and Bruch’s membrane.[24] A phototoxic components of lipofuscin such as A2E (Bis-retinoid N-retinyl-N-retinylidene ethanolamine) that induces inflammation and apoptosis in RPE cells,[25] are accumulated with age and mediate damage under blue light exposure.[26][27] It has been reported that iron levels increase in RPE during ageing and this intracellular iron can interact with bisretinoid lipofuscin in RPE to promote cell damage.[28] Therefore, to alleviate the deteriorating effects of lipofuscin on age-related macular degeneration, iron chelation, either independently or in combination with bisretinoid inhibitors could potentially serve as AMD treatments.[29] To protect human RPE cells from oxidative damage, caused by reactive oxygen species generated by the photo-excited lipofuscin, also is able L‐Citrulline, a naturally occurring amino acid with known antioxidant properties[30] and the main active component of Spirulina maxima P-phycocyanin - pigment with anti-inflammatory and antioxidant activities.[31]

Zinc-deficient animals showed a greater number of lipofuscin granules.[32] The relationship between zinc deficiency and enhanced lipofuscin accumulation suggest that zinc deficiency may result in the accumulation of substrates for autophagy whereas low zinc does not stimulate autophagy.[33] Autophagy is also inhibited when A2E-treated RPE cells are exposed to blue light.[27] Currently, the only intervention available for the treatment of dry AMD is Age-Related Eye Disease Supplement (AREDS), an oral supplement containing vitamin C, vitamin E, lutein/zeaxanthin, and zinc. It was shown that AREDS can reduce the risk of advanced AMD by about 25% over a 5-year period in patients with intermediate AMD.[34]

Role of lipofuscin in age-related neurodegeneration

Progranulin neurons that normally have high levels of progranulin expression are more susceptible to age-related pathology, such as neuronal lipofuscinosis, in GRN−/− mice. [40] 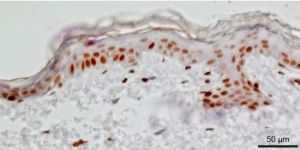 Lipofuscin is an endogenous photosensitizer that efficiently absorbs ultraviolet radiation and visible light, forming electronic excited states that transfer energy to surrounding molecules. It is assumed, that photosensitized lipofuscin is cytotoxic because of its ability to incorporate redox-active transition metals (Fe+2), resulting in a redox-active surface, able to catalyze the Fenton reaction. Reactive oxygen and nitrogen species (ROS/RNS) generated by photosensitization of lipofuscin leads to DNA damage and strand breaks.[42][43] It was observed that application of vitamin E may reduce the level of lipofuscin in skin biopsies as well as lighten the skin (but not in very old ones).[44][12] Light-induced skin damage can be protected by regulating the ROS-ER stress-autophagy-apoptosis axis with hydrogen sulfide (H2S).[45]

It was suggested that formation of A2E and other toxic lipofuscin bisretinoids, such as A2-DHP-PE (A2-dihydropyridinephosphatidyl-ethanolamine) and atRALdi-PE (all-trans-retinal dimer phosphatidylethanolamine), occurs in the retina in a non-enzymatic manner and can be considered a by-product of a properly functioning visual cycle.[46] The formation of A2E was completely inhibited in total darkness, so, humans with retinal or macular degeneration may slow progression of their disease by limiting exposure to light.[47]

Meclofenoxate is a cholinergic nootropic also known as centrophenoxine. It is an ester of dimethylethanolamine (DMAE) and 4-chlorophenoxyacetic acid (pCPA). Meclofenoxate, as well as DMAE, have been found to increase the dissolution and removal of lipofuscin[48][49][50] leading to lifespan extension of mice.[51][52] As a result of meclophenoxate treatment, a gradual decrease in the myocardial volume occupied by the pigment was noted. After 4-6 weeks of treatment, the pigment bodies were found lodged into the capillary endothelium and the lumen, facilitating the removal of the pigment via blood stream.[53] [54]

Remofuscin, a small molecule belonging to the tetrahydropyridoether class of compounds is able to remove lipofuscin from the RPE by accumulation specifically in RPE pigments and thus stimulation of the exocytosis.[55] Remofuscin formerly known as Soraprazan a potent and reversible selective inhibitor of gastric H,K-ATPase may be a promising drug candidate to manage neurodegenerative diseases related to lipofuscin accumulation.[56] Remofuscin reverses lipofuscin accumulation in aged primary human RPE cells and is non-cytotoxic in aged SD mouse RPE cells in vitro.[57] Mechanism causing lipofuscinolysis may involve the reactive oxygen species generated via the presence of remofuscin. Remofuscin binds to lipofuscin and is a superoxide generator when illuminated with light. Superoxide might help to degrade the polymeric lipofuscin into smaller units which then are transported out of the lysosomes by exocytosis.[57][58] Remofuscin reduces existing levels of lipofuscin in the RPE instead of merely slowing down accumulation of further toxic Vitamin A aggregates.[59][58]

Retrieved from ‘https://en.longevitywiki.org/index.php?title=Lipofuscin&oldid=2385’
Categories:
This page was last modified on 28 December 2022, at 21:43.
Content is available under Creative Commons Attribution-ShareAlike unless otherwise noted.
Privacy policy
About Longevity Wiki
Disclaimers